>A number of years ago, I stumbled upon an interesting article from the Journal of the American Medical Association (JAMA). The article detailed the physiology of crucifixion – what it may have looked like, what it would have entailed, and how death would have occurred from an anatomical and physiological perspective. I believe that the article has been disputed and attacked since its publication, but I still found that the drawings and the explanations make Jesus’ death the real, historical event that it was.

Here’s an abstract of the article.

Jesus of Nazareth underwent Jewish and Roman trials, was flogged, and was sentenced to death by crucifixion. The scourging produced deep stripelike lacerations and appreciable blood loss, and it probably set the stage for hypovolemic shock, as evidenced by the fact that Jesus was too weakened to carry the crossbar (patibulum) to Golgotha. At the site of crucifixion, his wrists were nailed to the patibulum and, after the patibulum was lifted onto the upright post (stipes), his feet were nailed to the stipes. The major pathophysiologic effect of crucifixion was an interference with normal respirations. Accordingly, death resulted primarily from hypovolemic shock and exhaustion asphyxia. Jesus’ death was ensured by the thrust of a soldier’s spear into his side. Modern medical interpretation of the historical evidence indicates that Jesus was dead when taken down from the cross.

I’ve scanned a few of the illustrations from the article for your consideration (the copyrights for these belong to the JAMA). 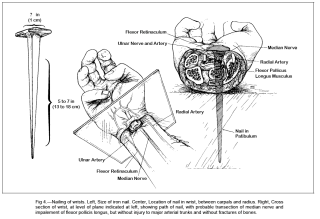 I don’t want to sensationalize the crucifixion of Jesus. Nor do I want to horrify or guilt you into remembering his death. My purpose is to remind you that his death was historical, and it was real. He died a real death in a most imaginable way. His pain was real. His body was literally pierced.
Who has believed what he has heard from us?
And to whom has the arm of the LORD been revealed?
For he grew up before him like a young plant, and like a root out of dry ground; he had no form or majesty that we should look at him, and no beauty that we should desire him.
He was despised and rejected by men; a man of sorrows, and acquainted with grief; and as one from whom men hide their faces he was despised, and we esteemed him not.
Surely he has borne our griefs and carried our sorrows; yet we esteemed him stricken, smitten by God, and afflicted. But he was wounded for our transgressions; he was crushed for our iniquities; upon him was the chastisement that brought us peace, and with his stripes we are healed.
All we like sheep have gone astray; we have turned—every one—to his own way; and the LORD has laid on him the iniquity of us all. He was oppressed, and he was afflicted, yet he opened not his mouth; like a lamb that is led to the slaughter, and like a sheep that before its shearers is silent, so he opened not his mouth.
By oppression and judgment he was taken away; and as for his generation, who considered that he was cut off out of the land of the living, stricken for the transgression of my people? And they made his grave with the wicked and with a rich man in his death, although he had done no violence, and there was no deceit in his mouth.
Yet it was the will of the LORD to crush him; he has put him to grief; when his soul makes an offering for guilt, he shall see his offspring; he shall prolong his days; the will of the LORD shall prosper in his hand.
Out of the anguish of his soul he shall see and be satisfied; by his knowledge shall the righteous one, my servant, make many to be accounted righteous, and he shall bear their iniquities.
Therefore I will divide him a portion with the many, and he shall divide the spoil with the strong, because he poured out his soul to death and was numbered with the transgressors; yet he bore the sin of many, and makes intercession for the transgressors.  – Isaiah 53