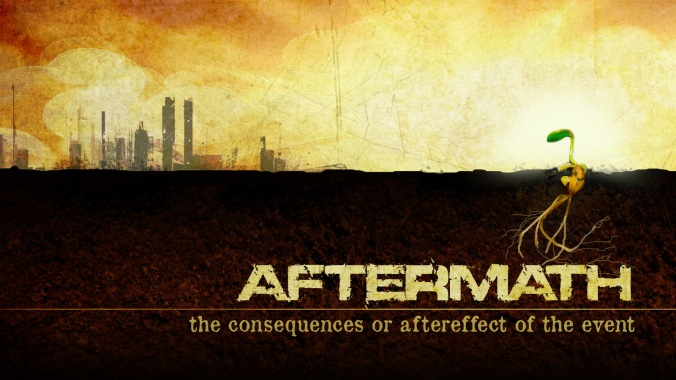 Easter weekend came and went like warm weather around here in Maryland. In our church rhythm, we like to talk about the impact of the resurrection over two weeks. Our reasoning is that visitors/guests from Easter weekend who come back could be seeking God far beyond the religious obligation that Easter can be. So on the weekend following Easter, we try to invite a response to the Gospel story as clearly and in as compelling a manner as possible. I spoke from Luke 24:13-35, and we looked at two disciples’ response to the resurrection.

The main point of the message was that the resurrection, as unexpected and surprising as it was at the first, demands a response. If we believe that Jesus is risen from the dead, then he has incredible power and authority, and thus can make a claim on our lives. I quoted James Martin’s article in the Mar. 26 Wall Street Journal,

“Easter says, above all, that Jesus Christ is Lord. That is an odd thing to read in a secular newspaper. But I’m merely stating a central Christian belief. And if he is Lord, and if you’re a Christian, then what he says has a claim on you. His teachings are invitations, to be sure, but they are also commands.”

I ended the message with a plea to respond to the living Lord Jesus by surrendering your life to his rule. In doing so, Jesus makes us a new person, gives us new purpose with new priorities, and brings us a new perspective.

I don’t know how many responded, but God does. (If you’re reading this, and you’re one of those who responded, send me an email. I’d love to connect you to some next steps in growing with Jesus.)

For those who have already responded to the claims of the resurrected Jesus, life in the aftermath of the resurrection poses a host of new possibilities and promises. Jesus’ resurrection means that all those who believe and trust in him will also have a resurrection from the dead. But what do we do until that day? Drawing from 1 Cor. 15, N.T. Wright encourages us to pay attention to the way that Paul concludes his most detailed discussion of the resurrection. In v. 58, Paul concludes, “Therefore, my beloved brothers, be steadfast, immovable, always abounding in the work of the Lord, knowing that in the Lord your labor is not in vain.”

This conclusion is so surprising. After spending 57 verses unpacking how Jesus’ resurrection gives hope for ours and what our own resurrection will be like, he tells us to go and abound in the work of the Lord now. What gives? I’d expect him instead to tell us how to prepare for life after death.

But maybe that’s exactly what he’s doing. You see, for Paul, the resurrection wasn’t just the end of sin and death, it was the end of an age, an era, marked by sin and death. Jesus’ resurrection declares that the old creation has come to an end. Sins have been forgiven and now a new creation (marked by redemption and restoration), even a new covenant, are now coming into effect.

Life in the aftermath of the resurrection isn’t just a waiting room for heaven, but rather the onset of a new world, one where heaven meets earth and the kingdom of God has invaded. The resurrection says what happened to Jesus (life from death) is going to happen not just for his followers, but also for the broken cosmos. New creation.

That means the aftermath begins now as God brings sinners from death to life, and then sends them out to be agents of new creation: proclaiming, working, beautifying, restoring, and reconciling the remnants of this age as a foretaste of the kind of world that will become a complete reality when Jesus returns.

I know that’s really heady, so think of it this way. Our resurrected lives can be glimpses of the kind of full-on resurrection that’s in store for the whole world. We can be appetizers for the banquet that God is going to throw when Jesus returns. Our work and life matter now when we do it with a view towards showing the world today what kind of world has begun with Jesus’ resurrection and is coming when he returns.

One thought on “The Weeklong Sermon – Life in the Aftermath”