This past Saturday, I had the unexpected joy of serving an elderly gentleman, Bill Scott, alongside two other members of our church – Mark and Dustin. Mr. Scott lives in a 175-year old house in a little corner of Laurel, MD. What I thought would be some kitchen work turned into having to tear out the entire floor of his kitchen (which had sunk down about 3 feet!) and laying some new joists. I was completely blown away and blessed by the five hours I spent there. In order describe how, I need to give some context.

In the past year, God has been prodding me to think more deeply about compassion and acts of service. How do we serve people in a way that dignifies them and empowers them as image-bearers? How do we intentionally humble ourselves so that we don’t make ourselves to be a sort of savior in our acts of service? The last thing I wanted to do was go and serve Mr. Scott in a way that made him feel inferior to me or that he was just the recipient of some sort of handout. I knew that this would be a special morning when this 70-year old man went straight to work alongside us, running scraps of floor out to the trash heap as we worked to tear up rotten wood and layer up layer of linoleum flooring. (Apparently over the course of 50 years, the floor was ‘fixed’ by just adding another layer of flooring on top of the one in need of repair.)

As we tore up the floor, I got to talking with Mr. Scott. I began with simple questions about the community and how long he had lived there. We had about a 30-minute break to sit in his screened porch and converse about the neighborhood and how the community had changed. Here’s what I discovered:

We probably spent a total of two hours in conversations listening to stories about his college days and boosters as well as what it was like to set records for high school football and basketball in Prince George’s County. I felt so humbled to be in the presence of a true champion whose kitchen floor happened to have caved in.

Making all things new: relationships, assumptions, even the floor!

That’s when it hit me. How much would I have assumed about Mr. Scott had I not simply given him the dignity of asking questions about his life and story? Would I have thought him a criminal? a homeless man? dangerous? Would I have given him the time of day? Would I have ever dreamed that he was a civil rights pioneer? a community advocate and leader? a God-fearing brother in Christ? I was humbled as well as glad that God had been laying in me some deep-seated convictions that allowed me to learn from and appreciate this hero. There is something powerful about asking questions and taking the posture of a learner. Too often, I think I have to have all the answers, that I have to be the one to impart. Five hours with Mr. Scott showed me the value of just listening. 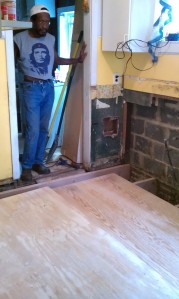 To top it off, the next day, Mr. Scott came to church because he heard I was preaching! He sat five rows back and listened to me somewhat expressionless. Occasionally, he would grin, but that was about it. After the service, he came down to the front with an ear-to-ear smile. “Brother Bill! You made it!” I exclaimed. “You did it. You preached the Word. You preached the Word,” he said. I gave him a huge hug and proceeded to introduce him to everyone around me. “Did you know that his man is a hero? Did you know that he blazed a trail for integration in high school sports? This is Bill Scott! We are honored to worship with you.”

I’m not sure who served whom that Saturday. The project still needs to be completed, and strangely, I feel like that kitchen floor is symbolic of what is happening to me. My friendship with Mr. Scott is tearing up the warped floorboards of my assumptions, and I look forward to laying down some new flooring in more ways than one.