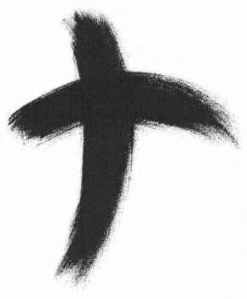 I attended my second ever Ash Wednesday service last night. A local Anglican Church held a service at another Evangelical Free church. It was cool to be with another congregation in the building of yet another congregation. I couldn’t help but remark how beautifully big the Church is, and how powerful the Church becomes when we get past our franchise mentality and seek to learn from one another’s unique expressions of worship.

I have been reading the Daily Office Lectionary for my daily Bible readings, so the more formal liturgical format wasn’t awkward or foreign at all. In fact, I was often moved by the various responsive prayers and rites. At times, the prayers would crescendo as the deep congregational longing found expression through repeated words as if the more we repeated them, the more we wanted them to be true. It made me long for that which I recited.

This was actually the first time I took ashes onto my forehead – and the words keep reverberating in my head, “Remember that you are dust and to dust you shall return. Repent and believe the Gospel.” As I looked around at several hundred people with smudges on their foreheads, I couldn’t help but feel a little embarrassed, but proud at the same time. Embarrassed to have this mark on my forehead, but proud to be counted with others who for that night chose to recognize their mortality, their need for God, and their utter helplessness without a Savior.

Oddly, I kept wanting to get up and leave right after the Imposition of Ashes. I was fighting something within me – something that wanted to flee. It was a restlessness that refused to just sit and be. All throughout the remainder of the service, I kept fighting excuses to get up and go, but each time, there would be some musical piece in the service that would just light up my heart, causing me to sit and worship. One of the songs was a polyphonic song – I was just obliterated by the harmonies and the sacred sound. It was based on Psalm 51.

Over the next hour or so, the combination of Word, song, sacrament, and community melted me. I found myself in tears over the realization that I have a Savior, Jesus is his name, and he has seen my inadequacies and my failures. I felt him bid me come once again, not with shock over the things I’d done, but rather  with relief that I finally saw myself for who I really was – what He had seen all along. After about two hours, I needed to get home, but the final song echoed through my heart and my head. It’s a song by Matt Redman called, “You Alone Can Rescue”.

I don’t know what your tradition is. If you’re like me, you never grew up celebrating Ash Wednesday or if you’re like some of my friends, you went through the motions of Ash Wednesday never grasping its significance. After last night, I can tell you that there’s something powerful about recognizing with symbolic ritual our need for a Savior even today. It doesn’t matter if you’re a saint, a pastor, a moral person, a wayward prodigal – Lent is for all of us because Jesus meets everyone’s need. (If you’re looking for a good explanation of Lent, Bobby Gross has a great treatment of the Church Liturgical Calendar in his book, “Living the Christian Year”)

There’s something life-giving about recognizing that we’re going to die, and that God pays attention to the brokenness, the disappointments, the failures, and responds to us with mercy and kindness. I’m grateful to have started this 40-day season of Lent – a time to reflect on, soak in, and experience the hurt and suffering of this world, my world…by way of ashes. I can only anticipate the implications of the greater truth that God took such hurt and suffering upon himself to redeem, restore, and resurrect.

May this Lent be a powerful one for you.

One thought on “From dust to dust”