For the first time in his life, my son, Calvin, watched “Rudolph the Red-nosed Reindeer” yesterday. It had been a while since even I had seen the whole thing, and the conversation that ensued was definitely worth the price of the show (which was free thanks to YouTube).

Dad, who is that monster?

Why does he want to eat those deer? Is he bad?

He doesn’t like the deer, so he wants to eat them, son.

Hmmm…is he a bad monster? 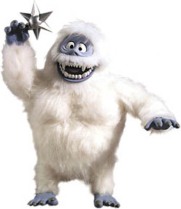 (fast forward to the last part of the show…)

Dad, what happened to the monster?

The elf pulled out all his teeth, and they got away when the monster fell off the cliff.

Dad!!! How come the monster’s coming in the house? Is the monster good now?

The man brought him back. Yes, he is. Now he’s good.

What happened? Why did he turn good?

The man helped changed him. Now he’s good because he understands Christmas.

I see. So he won’t eat the deer? Can the monster be bad again?

No, now that he’s been changed. He’ll be good.

Because of Christmas?! He’ll be good from now on! He’s a good monster. He won’t eat deer. I like good monsters [insert growling roar here]…I like Christmas.

Couldn’t have said it better myself, kid.

Merry Christmas to all the changed, good monsters out there – from my family to you and yours…