Ok, sorry for the frequent sports-related posts, but I thought I’d share this “guest post” by my senior pastor in his weekly column that goes out to our church folks. (I think he should start a blog, but he hasn’t yet). Enjoy! 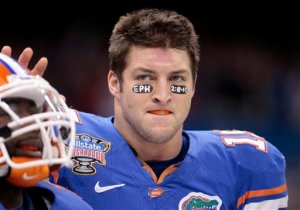 Why do people have a problem with Tim Tebow? The media calls it the “Tim Tebow Effect.” For those who do not recognize the name, Tebow is the back up quarterback for the Denver Broncos (ex-Bear Kyle Orton was the first string QB) who has led the team to 4 victories in the last 5 games. In fact, just last night he scored on a 20-yard touchdown run with 58 seconds left to cap a 95-yard drive, giving Denver a 17-13 victory over the Jets (sorry Bob Collins).

It is my personal suspicion that much of this TT Effect is due to the fact that he is an outspoken Christian which riles many who do not particularly care for anyone who is outspoken about religion–especially the Christian kind. I found an interesting article in the Washington Post (October 31) that confirmed my suspicion and yet encouraged me at the same time. It was written by Tom Krattenmaker who admits that he is not a very religious person.

“As one who has publicly criticized Tebow’s faith expression as simplistic and exclusive, as out of step with the real and present pluralism and tolerance we have in America, I confess to being annoyed by Tebow at times. While playing for the Florida Gators in his college days, he took the crusading, winning-for-Jesus project to its apotheosis, especially with his ‘facial evangelism’ as I call it — the practice of inscribing scriptural references [John 3:16] on his eye black, for all the camera close-ups to see… It’s that very outspoken Christian piety, in particular, that seems to have made Tebow not so much a young athlete as a flash point in the culture wars. There are no real blemishes on Tebow’s public record to suggest he’s a hypocrite or a sham… No abuse of women. No mistreatment of teammates, opponents, or fans. He does genuinely good deeds for kids and prisoners [he has a foundation that is partnering with a Christian organization – CURE, to build a children’s hospital in the Philippines.] That these often come with a dose of evangelism troubles many of us who are less religious. But by putting himself out there to help people, by resisting the temptation to abuse his stardom in the obnoxious ways certain other Christian sports stars have done, Tebow has earned the right to share his religious message more than any religious athlete who comes to mind.”

So if we are going to be outspoken about our faith in this pluralistic culture, we had better live a life consistent with that profession. I’m glad we are finally figuring that out!